A Walk Through the Tamu Sarikei 2016 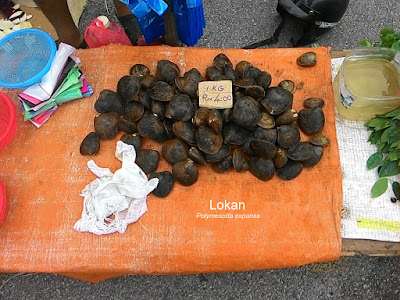 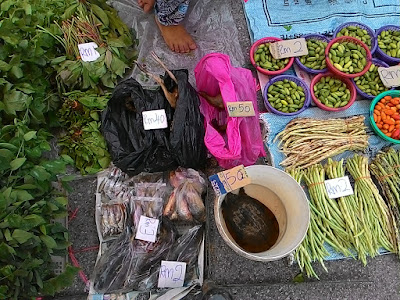 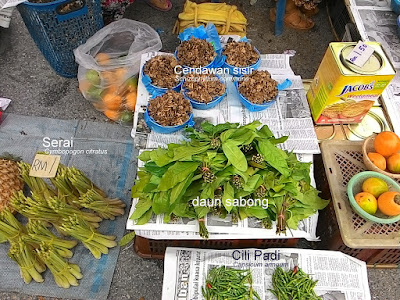 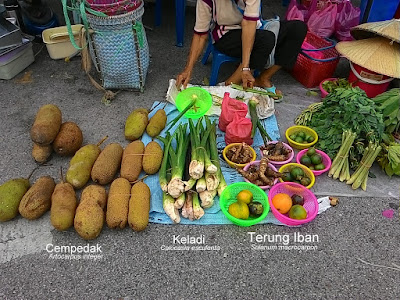 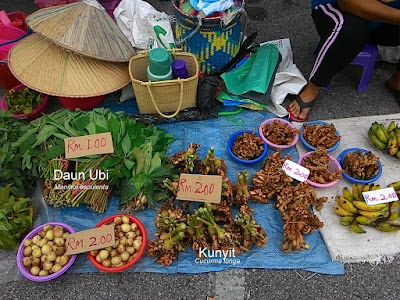 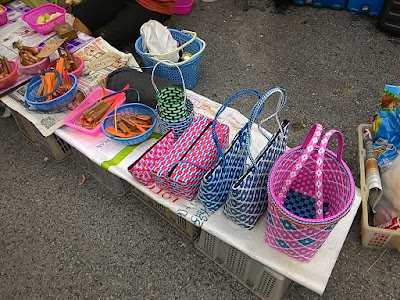 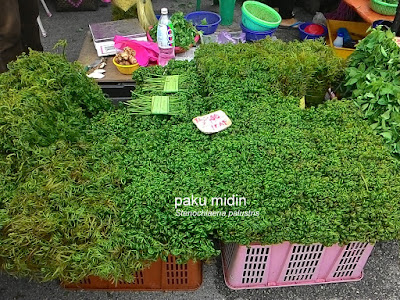 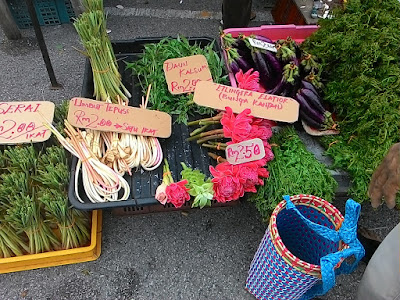 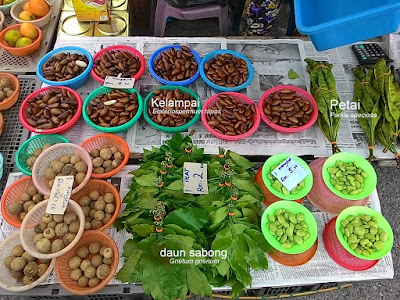 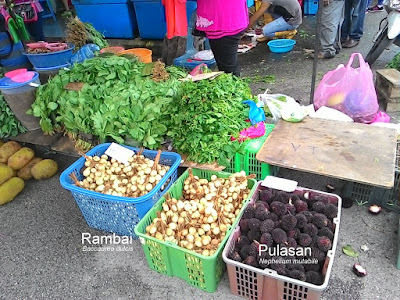 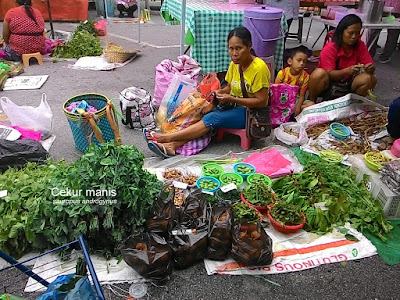 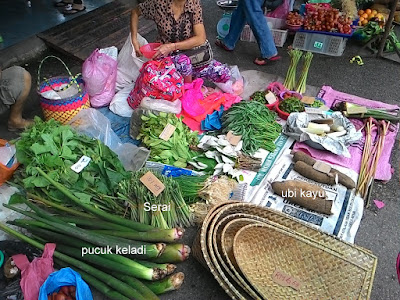 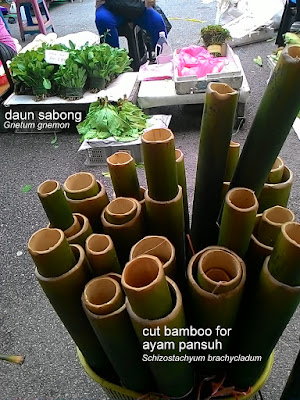 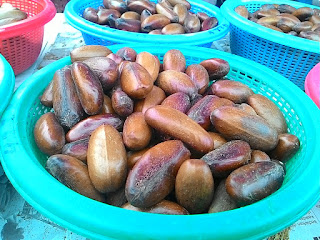 The seed of Elateriospermum tapos is known a  Perah in Malaya.  It is called Kerampai by the Sarawak Iban, or lepis by the Bidayuh.

Elateriospermum is a monotypic plant genus in the family Euphorbiaceae.  It is found from Southern Thailand, Malaya, Borneo, Java and Sumatra.  The seeds, usually 3 in a fruit capsule, would fell on forest ground as the capsule cracked when ripened.

The seeds are eaten cooked or roasted, but too much may cause dizziness.  Uncooked seeds contain cyanide, thus unconsumable.
Posted by Ongzi at 17:35 No comments:

SCIENTIFIC AMERICAN : Fossil Find Hints at Aquatic Origin for Flowering Plants
by Sarah Graham on May 3, 2002

Scientists have discovered in China the oldest, most complete flowering plant fossil yet, according to a new report. The 125-million-year-old specimen belongs to a new plant family and provides clues as to how now extinct species gave rise to modern flowering plants, or angiosperms. The work, published today in the journal Science, suggests that angiosperms--the dominant vegetation in the world today--may have evolved from aquatic, weedy herbs. 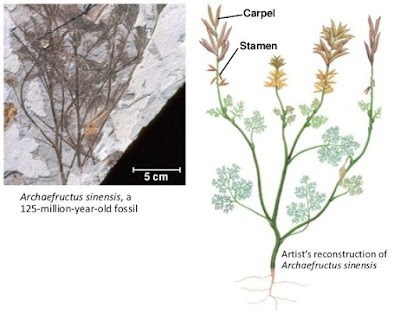 Ge Sun of Jilin University in China and his colleagues recovered the complete fossil of the plant, dubbed Archaefructus sinensis, from a slab of rock found in northeastern China's Liaoning Province by local farmers . The region, which has produced an array of remarkable fossils, yielded a similar but incomplete fossil in 1998. "After having only a fragment and trying to imagine what the whole plant was like, it was a great surprise to find leaves typical of a plant that lived underwater with characteristics very unique to flowering plants at such an early age in their history," says study co-author David L. Dilcher of the University of Florida. Although the plants lacked flowers, the scientists discovered evidence of seeds enclosed within the female reproductive organs, a characteristic of flowering plants. With its thin, curving stems, A. sinensis had a vaguely seaweed-like appearance.

To determine how their find fits into the evolutionary family tree, the researchers compared the traits evident in the fossil plant with genetic and morphological information from 173 modern flowering plants. The results indicate that the specimen represents a previously unknown family, Archaefructaceae, with two species A. liaoningensis and A. sinensis. The authors propose that Archaefructaceae is a sister group to all exant angiosperms. Further research is needed before Archaefructus is fully accepted as the most ancient flowering plant known, but botanists are excited about its implications. "The mysteries of the origin and radiation of the flowering plants remain among the greatest dilemmas facing paleontology and evolutionary biology," says plant biologist William L. Crepet of Cornell University. He adds that the new fossil is "one of, if not the most, important fossil flowering plant ever reported."
Posted by Ongzi at 23:30 No comments:

The ‘new variety’ of Jambu had been in the market for few years, but still many are not aware of its existence.

Visitors to Cameron Highlands will surely encounter this fruit at either Kea Farm or Brinchang night market.  Priced for a hefty RM10 for 3, it come in two attractive colours: Fuji-apple-red and granny-smith-green, vacuum packed in clear PE bags. 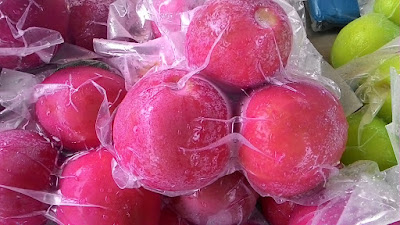 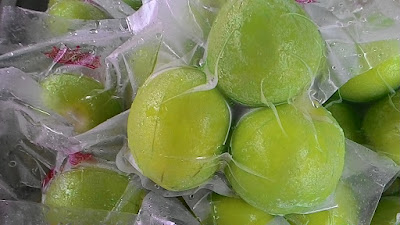 Consumers Association of Penang ( CAP ) had in 2007 warned the public about this ‘new variety’ of guava.   According to CAP, the guava was actually normal jambu batu berbiji ( Psidium guajava ), peeled, soaked in coloured sugar solution.  The coloring agent used are E133 Brilliant Blue and E102 Tartrazine for the light green colour; and E122 Carmoisine for Fuji-apple red respectively.

The product is correctly labeled as ‘Jambu Jeruk’.  However, information on coloring agent is Ec177, which is non-existence.  Also, E509 Calcium Chloride is used. 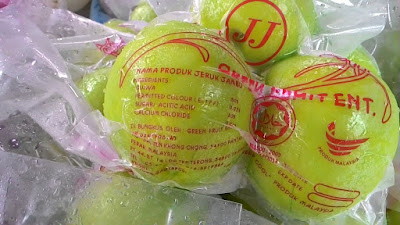 Hyperaccumulator refers to of plants that belong to distantly related families, but share the ability to grow on metalliferous soils and to accumulate extraordinarily high amounts of heavy metals in the aerial organs, far in excess of the levels found in the majority of species, without suffering phytotoxic effects.

Among the hypotheses proposed to explain the function of hyperaccumulation, most evidence has supported the "elemental defence" hypothesis, which states that plants hyperaccumulate heavy metals as a defence mechanism against natural enemies, such as herbivores.   According to the more recent hypothesis of "joint effects", heavy metals can operate in concert with organic defensive compounds leading to enhanced plant defence overall.

Heavy metal contaminated soils pose an increasing problem to human and animal health. Using plants that hyperaccumulate specific metals in cleanup efforts appeared over the last 20 years. Metal accumulating species can be used for phytoremediation (removal of contaminant from soils) or phytomining (growing plants to harvest the metals). In addition, as many of the metals that can be hyperaccumulated are also essential nutrients, food fortification and phytoremediation might be considered two sides of the same coin.