Jasminum sambac, is a shrubby flower native to tropical and warm temperate regions of the Old World, of the Oleaceae ( olive ) family. The name Jasmine derived from the Persian yasmin, of which means 'gift from god'. The botanic name sambac is derived from a misapplication of the Sanskrit name champaca, which refers to the fragrant flowered shrub Michelia champaca.
The Jasminum family consists of some 200 species, loosely known as jasmines. It is also known as jasmin ( Portugal ), jasmine ( France ), pikake / pikaki ( Hawaii ). mallipu ( Tamil ), mogra ( Hindi ), sanoagyuta ( Tagalog ) , mallika ( Sanskrit ), melati ( Indonesia, Malaysia ), melur ( Malaysia ), and 茉莉花 ( China ). 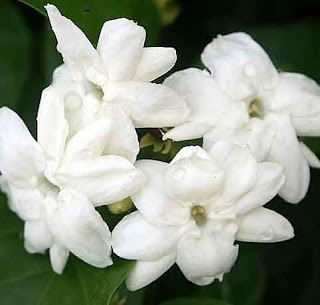 Cultivated species includes J. abyssinicum ( forest jasmine ), J. adenophyllum ( pinwheel jasmine ), J. cichotomum ( Gold Coast jasmine ), J. grandiflorum ( Spanish jasmine ), J. humile ( Italian yellow jasmine ), J. mesnvi ( Japanese jasmine ), J. odoratissimum ( yellow jasmine ), J. officinale ( common jasmine ) J. parkeri ( dwart jasmine ) and J. polyantum.
Jasminum sambac ( Arabian jasmine ) is among the most popularly cultivated jasmine flower. It is native to southwestern and southern Asia. Cultivated as an ornamental plant for its strongly scented flowers, it is an evegreen shrub, capable to reach 3m in height. The leaves are simple, opposite, ovate, 4 - 12.5cm long and 2 - 7.5cm broad. The fowers are white, strongly scented, in clusters of 3 - 12, corolla 2 - 3m diameter with 5 - 9 lobes. The flowers open at night and close in the morning. The fruit is a purple-black berry, 1 cm in diameter.
In China, J. sambac is consumed as jasmine-flower tea ( 茉莉花茶 ). The flowers also mixed with green tea to make jasmine tea ( 香片 ).
In the Philippines and Indonesia, the J. sambac was adopted as their national flower.
In many countries, including, Hawaii, the Philippines, and India, the J. sambac flower is made into leis, corsages, crowns for welcoming guests, and as garlands on women’s hair.
The Hindus and Buddhist often use the flower as an offering to their deities.
Even though jasmine is loosely refers to the flowers of Jasminum genus, it also refers to other genus of scented flowers :
Trachelospermon jasmioides - Star Jasmin 络石 – ( Apocynaceae )
Gardenia jasminoides - Cape Jasmin 梔子 – ( Rubiaceae )
Gelsemium sempervirens - Carolina Jasmine – ( Gelsemiaceae )
Millingtonia hortensis - Tree Jasmine – ( Bignoniaceae )
Nyctanthes arbo-tristis - Night-flowering Jasmin – ( Lamiaceae )
Cestrum nocturnum - Night-blooming Jasmin 夜來香  - ( Solanaceae )
Posted by Ongzi at 16:26 No comments: 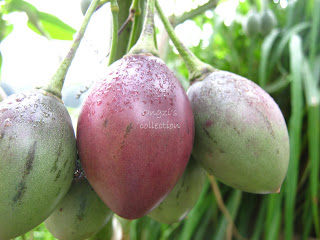 爱情果is the name the local Cameronians call it, translated to ‘love fruit’ in English. It is so called due to its mixed taste of sweet, sour and bitter … the taste of LOVE.
.
It is originated from , where it is called tomate de árbol, literally means tree tomato. The name tamarillo was adopted in to distinguish it from ordinary tomato, and soon it has become the standard commercial designation for the fruit.
.
Tamarillo, Solanum betaceum, is a family of the Solanaceae family. It is also called Cyphomandra betacea.

.
The fruit is egg-shaped berry, about 4’’ length and 2’’ width. Fruit colour varies from purple, red, orange to yellow. The tree can grow up to 6 meter in height. 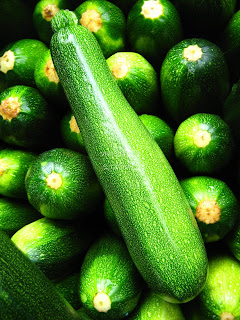 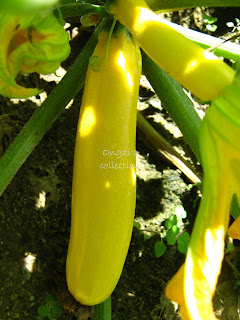 Zucchini or courgette is a small summer squash. Along with some other squashes, it belongs to the species Cucurbita pepo. Zucchini is the more common name in North America, , and ; while courgette is more commonly used in , , , , the , and .
.

‘Zucca’ is the Italian word for squash, and ‘zucchina’ is its diminutive, become ‘zucchine’ in the plural. However, ‘zucchino’, the masculine form, become ‘ zucchini’ in the plural.
.

‘Courgette’ is from the French word for squash. It is a diminutive of ‘courge’
.

Zucchini can be yellow, green or light green, and generally have a similar shape of a ridged cucumber, though a few cultivars are available that produce round or bottle-shaped fruit.
.

In culinary context, zucchini is a vegetable, which means it is usually cooked and presented as a savory dish or accompaniment. Botanically, it is an immature fruit, being the swollen ovary of female zucchini flower.
Posted by Ongzi at 23:07 No comments: 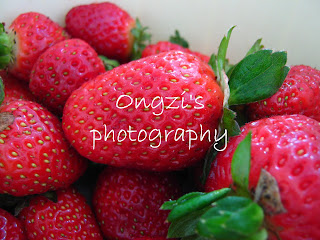 Garden strawberry, a species of Fragaria, belongs to the family Rosaceae. There are more than 20 described Fragaria species and many hybrids and cultivars.
The garden strawberry was first bred in Brittany, in 1740 via a cross of Fragaria virginiana from eastern North America, which was noted for its favor, and Fragaria chiloensis from Chilie and brought by Amédée-François Frézier, which was noted for its large size.
Cultivars of Fragaria x ananassa have replaced, in commercial production, the woodland strawberry ( Fragaria vesca ), which was the first strawberry species cultivated in the early 17th century.
Technically, it is an accessory fruit : that is, the fleshy part is derived not from the ovaries, but of the hypanthium. So, the seeds are the actual fruits of the plant, and the flesh of the strawberry is modified receptacle tissue. 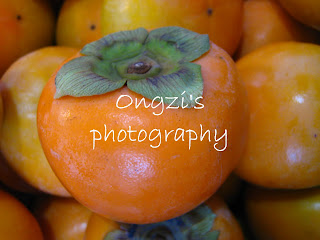 Persimmon is from the genus Diospyros of the Ebenaceae family. There are several species of edible persimmons :

Diospyros discolour – Mabolo / velvet apple – native to the Phillipines. It is bright red when ripe

Diospyros kaki – Japanese persimmon 柿子- originated from , it is the most widely cultivated species. It is edible in its crisp firm state, but has its best flavor when allowed to soften

Diospyros lotus – date plum – Native to southwest Asia and southeast , it was know to the ancient Greeks as ‘the fruit of the gods’ 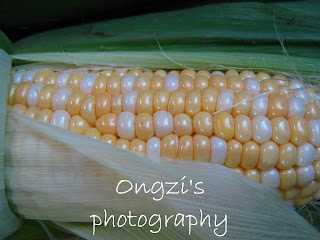 Sweet corn, ( Zea mays ) also know as maize , or corn, originated from American continent. RM10 for 8 ears, the corn are sweet. even eaten raw. It is also best consumed after steamed, boiled or grilled.

Sweet corn is the result of a naturally-occurring recessive mutation in the genes which control conversion of sugar to starch inside the endosperm of the corn kernel.

The fruit of sweet corn is the corn kernel, a type of caryopsis. The ear is a collection of kernels on the cob. 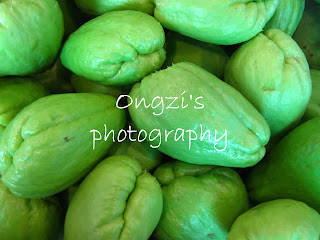 Chayote 佛手瓜( Sechium edule ), is an edible plant that belongs to the gourd family, Cucurbitaceae.

Chayote was first domesticated in Mexico, where the fruit is used in both raw and cooked forms. When cooked, it is similiar to summer squash. Raw chayote can be added to salads or salsas, and it is often marinated with lemon or lime juice.


In Taiwan, chayotes are widely planted for their shoots, known as 龍鬚菜, literally means dragon-whisker-vegetable. 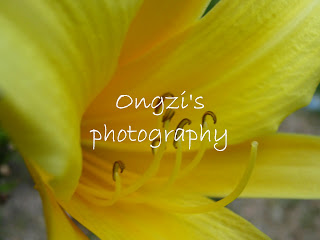 Daylily is the common name of Hemerocallis, a member of Hemorocallidaceae famliy, originated from Europe and east Asia.
Hemerocallis are perennial. The flower of most species open at sunrise and wither at sunset, yet some are night-blooming.

The flowers of some species are edible and are use in Chinese cuisine. They are sold fresh or dired in Asian market as 'golden needles' ( 金针). 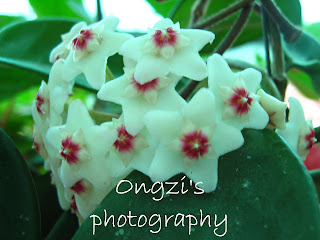 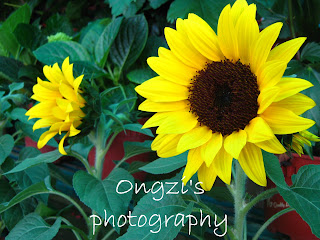 Hoya is a genus of 200 - 300 species of tropical climbing palnts in the family Apocynaceae, native to southern Asia, Australia and Polynesia. This genus was named by botanist Robert Brown, in honour of his friend, Thomos Hoy.

Hoyas grow well indoor, preferring brigt but not direct sunlight, but will tolerate fairly low light levels at the expense of rapid growth and blooming. 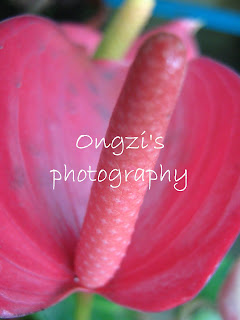 Anthurium, is a large genus of about 600 - 800 species, belonging to the arum family ( Araceae ). The species has neotropical distribution : mostly in wet tropical mountain forest of Central America and South America, but not found in Asia.

Sunflower ( Helianthus annuus ) are annual plants native to the Americas, from the family Asteraceae ( formerlly Compositae ). What is usually called the flower is actually a head of numerous florets drowded together. The outer florets are the sterile ray florets, while the inner florets, called disc florets will mature into what are traditionally called sunflower seeds,but are actually the fruit ( an achene ) of the plant.

The florets are arranged in a sprial pattern where the number of left spiral and the number of right spirals are successive Fibonacci numbers. Typically each floret is oriented toward the next by approximately the golden angle, 137.5°. Typically, there are 34 spirals in one direction and 55 in the other ; on a very large sunflower there could be 89 in one directionand 144 in the other. This pattern produces the most efficient packing of seeds within the flower head.
Posted by Ongzi at 15:23 3 comments:

Poinsettia, Euphorbia pulcherrima is a very lovely plant due to its red and attractive bract colours. It is the most popular decorative plant for Christmas and New Year. Poinsettias have a good market potential as potted flowering plants.

Poor plant quality may result from crowding, poor light, pest and disease problem, and poor scheduling. Scheduling poinsettia is complicated by the interaction of daylength, temperature and cultivar on lateral growth and floral development ( Larson & Langhans, 1963 ).

The removal of shoot apexes to overcome apical dominance and to promote lateral shoot development is referred to as pinching ( Larson 1985 ). In areas with good light, much more latitude may be allowed in time and type of pinching. Suggested pinch dates for Christmas crops vary somewhat with the area from which the information comes ( Pertuit, 1973 ; Tayama et al, 1975 ; Tayama 1978 ).

Pinched potted plants are more floriferous and shorter than single stem plants. Timing a pinch can also affect plant quality. Pinching too early can result in plants that are too tall, and pinching too late can reslut in plants too short. Therefore, pinching, as part of the poinsettia production cultural practices, is done to overcome the apical dominance in order to produce a better quality plant.