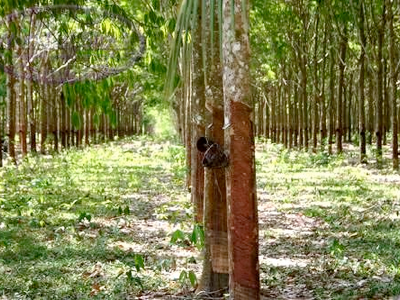 Standing tall outside the Department of Lands And Mines in Kuala Kangsar is one of the oldest rubber trees in the country, grown from an original seedling brought into the country (New Straits Times (Malaysia) 16 February 2010).

Before palm oil, Malaysia's "golden crop", the country was blessed with rich "milk" that never ceased to flow - latex that oozed from rubber trees.

But it has been decades since rubber was the No 1 or even a major contributor to the economy though it was rubber and tin that laid the foundation for the country's economy.

Although rubber prices have improved and many smallholders are returning to their plots to collect latex, the days of rubber as a pillar of the country's economy are unlikely to return.

Nevertheless, rubber will always have a special place in our history. Museum Negara, for instance, has a special mention of it. The story of rubber and how it came to the then Malay Federated States is a fascinating one, starting with a "crazy Englishman" Henry Nicholas Ridley. The botanist earned his "crazy" reputation because he was always stuffing rubber seeds into the pockets of everyone he meets, hoping they will plant the seeds.

The English had smuggled rubber seeds out of Brazil (then under Portugal) for planting in their colonies so that they would have their own supply of rubber.

Today, one of nine seedlings brought to this country by Ridley is still standing tall in Kuala Kangsar, the royal town of Perak. The tree is located just outside the office of the Department of Lands And Mines (Federal). It was planted there in 1877 and is said to be one of the two oldest rubber trees in the country.

This tree signalled the start of the rubber plantation era in the late 19th-20th Century, and turned the country into the world's largest producer of rubber at one time.

The story began in the 1870s with British administrators in India. Henry Wickham collected 70,000 rubber seeds from the Amazonian rainforest in Brazil and sent them to London's Kew Gardens to be germinated.

The seedlings were sent out to the British colonies and in 1876, nine were planted in Kuala Kangsar. The trees that came from the original Wickham stock were used to start the first plantation. For this, credit must go to Ridley, then director of the Singapore Botanic Gardens.

The "rubber revolution" of the early 20th Century saw virtually all other cash crops being brushed aside to make way for rubber plantations. In the 1930s, our rubber industry dwarfed that of Brazil's. The demand then for natural rubber worldwide, notably for making tyres for the newly-invented motorcar, gave the industry room to expand and rake in huge profits.

If you have difficulties locating the oldest rubber tree in the country, make your way to the Kuala Kangsar Tourist Information Centre right in the heart of town. Or call 05-777 7717.

If you're in Taman Tun Dr Ismail, Kuala Lumpur, visit the Kiara Park where there are many rubber trees. You can even pick up rubber seeds to plant in your garden... or be a Ridley and give them to your friends as a reminder of what an important role rubber played in the history of this country.