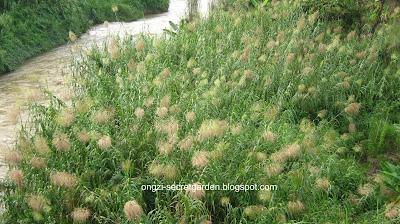 Phragmites karka is a very tall perennial common reed grows in thick pure stands on swampy lands.  The stems grow up to 5 meters in height and 2-3cm in diameter.
The origin of P.karka is uncertain.  However it is widely distributed all over the Old World’s tropical regons.
Common name : Bayongbong, glagah asu, gumulong, kasongket, palungpung, parongpong, perumpung, prumpung, tatepal, tatupele ( Indonesia ), pit-pit ( New Guinea ), 卡开芦 ( China,  Taiwan ),  nal, nalkhagari, doka-ghas, kilak, potagala, chamana, perunanal, nalam, eela karra ( India ), kyu ( Cambodia ), say nui ( Vietnam )  etc
Synonyms : Arundo karka, A. roxburghii, Phragmites cinctus, P. roxburghii, Trichoon roxburghii.
This plant is a reliable indicator of freshwater.   In places, such as at the mouth of Laguas River, Guam, there is a sharp division between the reeds and the plants which grow in brackish water.
The root of common reed is regarded as cooling and diuretic by the Chinese.
It is also used for thatching and making mats, baskets, chairs, fences, fish traps etc.
The culms used for hookah pipes, flutes, and pens.
Panicles are used for brooms.
The flowering stalks yield a fiber suitable for cordage.
It is planted at wetlands, treatment plants etc to remove nutrients, organic matter, COD and other pollutants.
﻿
﻿ Imperata cylindrica, commonly known as blady grass (Australia), speargrass (Nigeria), silver spike (S.Africa), cogon grass (USA), lalang (in Malay), 茅草 (in Mandarin), etc , is a species of grass ( Poaceae ), native to east and southeast Asia, India, Micronesia, Australia, and Africa.
It is first describe by Linnaeus in 1759 as Lagurus cylindricus.  French entomologist and botanist Palisot de Beauvois renamed it to current accepted name Imperata cylindrical.
Its other synonyms include : Calamagrostis lagurus, Imperata allang, I. arundinacea, I. koenigii, I. pedicellata, I. sieberi, I. thunbergii, Saccharum cylindricum, S. europeaum, S. loenigii, S. laguroides, Sl sisca, S. thunbergii.
It grow from 0.6 -3 m tall.
The leaves are about 2cm wide, and narrow to a sharp point at the tip.  Leaf margins are finely toothed and embedded with sharp silica crystals.  Upper surface is hairy near the base, underside is usually hairless.
Roots are up to 1.2m deep.
Propagation via seeds and rhizomes.
It can withstand draught and fire, regenerates quickly after fire.
Imperata cylindrica is found in areas where the soil has been disturbed, such as roadsides, building sites, agricultural land, ex-logging area, cleared jungle.  Once established it often form dense monocultues.
Despite considered weeds in most part of the world, it is cultivated in some area for commercial uses.
In Papua New Guinea, it is used for thatching the roofs of traditional homes.
It s planted as ground cover for soil stabilization to prevent erosion.
It is also used in paper-making, and weaving into mats and bags.
In traditional Chinese medicine, it is use for its medicinal properties for astringent, febrifuge, diuretic, tonic and styptic actions.
Some cultivars are planted as ornamental plants, including the red-leaved ‘Red Baron’
Young inflorescence and shoots may be eaten cooked.
Roots are edible containing starch and sugars. 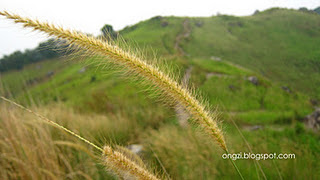 It canot stand heavy grazing.  However, it tolerates fire.
It is capable to adapt to wide range of soil type.
In Thailand, India  and Fiji, it is used as green fodder.
It is planted at slopes to prevent erosion.
P. polystachyon easily invades both wasteland and cultivated land,  and of course moutainous land too.
At many places, it is regarded as noxious weed.
Posted by Ongzi at 08:51 No comments: 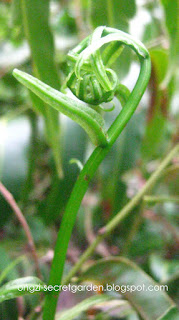 It is rhizomatous and epiphytic perennial, commonly found in fresh water and peat swamps, as well in secondary jungle.

The young frond tips, with or without open leaves are consumed as vegetable.  The frond colour varies from light green to dark green.  Red shaded leaves means malnutrition or unfavourable environment.

Stenochlaena palustris can be propagated from the spores.  Stem cutting with 4-6 nodes and some leaves are also used.  Rhizomatous stem can also be used.
Miding grows well on moist or irrigated soil.
It is very sensitive to herbicides.
Pests and diseases are not common, thus pesticides application is necessary.
Pruning of old fronds may promote new growth.
Posted by Ongzi at 20:01 No comments: 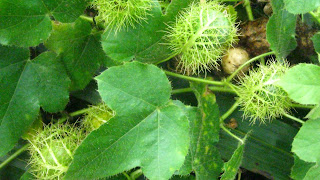 Passiflora foetida is a species of passion flower native to the tropical New World.  It is also known as wild maracuja, santa papa, marya-marya, wild water lemon, stinking passion flower, love-n-a-mist, or running pop.
The ‘Passion’ in passion flower refers to the passion of Christ, due to its unique physical structure of its flower. 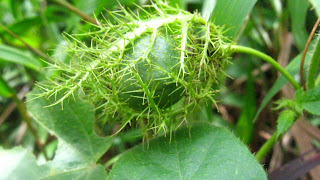 The specific epithet foetida means ‘stinking’ in Latin, refers to the strong aroma emitted by damaged leaves.
It is a creeping vine.
The stems are tiny and wiry, covered with minute sticky yellow hairs.   Older stems become woody. 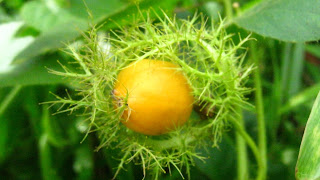 The leaves are three-lobed and viscid-hairy.  When crushed, the leaves give off a pungent odor for some people considered unpleasant.
The flowers are white, about 5-6cm diameter.
Fruit s are edible, globose, covered by hairy sepals, 2-3cm diameter, yellowish-orangey to red when ripe.
Seeds are black, covered by whitish pulp 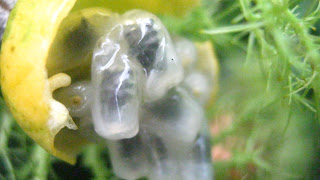