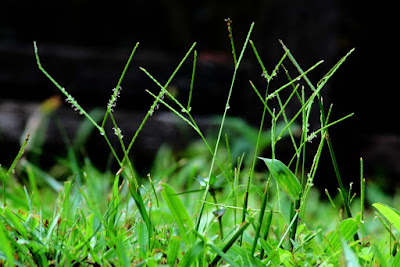 Economics
Used as a permanent pasture, ground cover and turf in moist, low fertility soils, particularly in shaded situations.  It is generally too low growing to be useful in cut-and-carry systems or for fodder conservation . 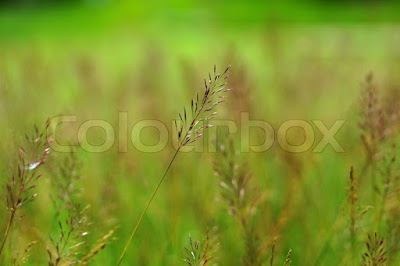 Description
A vigorous creeping grass with stout, tough rhizomes, the culms ascending to 45 cm. Inflorescence a small panicle, 7.5-10 cm long, with numerous slender branches. Spikelets narrow. Awn bristly, short and fine. The branches at first ascend almost vertically, spread obliquely at flowering and then bend upward again at fruiting. Each branch has three spikelets at its tip, one sessile and two pedicelled.

Economics
An extremely common grass in village pasture in the plains of Asia because the prostrate, creeping stems resist overgrazing and trampling.

It used to be used as a cover for coconut plantations in the Philippines, and in Guam the straw was used for making hats and mats.

Its creeping rhizome and its capacity to resist hard grazing makes it useful for stabilizing embankments and similar sites.

Useful for rough lawns, forming a dense, hard-wearing turf, but a troublesome weed when uncontrolled because of the sharp-pointed seeds.

The seeds work through clothing and cause irritating sores.

Grazing animals suffer severely from the ripe fruits becoming attached to their hair by the sharp basal callus. By this means the fruit works its way into the flesh and causes extensive ulceration. Dogs frequently develop abscesses between the toes from the same cause, and germinating seeds of this grass can sometimes be pressed out of large bags of pus in the dog's flesh

A serious pest in north Queensland.  It is listed in USDA’s Federal Noxious Weed List 2012. 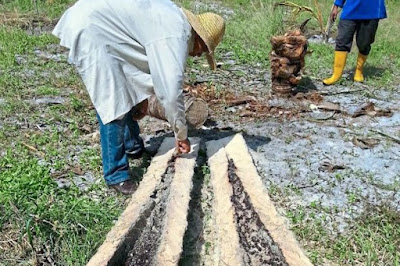 KUALA LUMPUR: A species of beetle illegally brought in across the Thai-Malaysian border has been ravaging the nation’s palm trees, and – if left unchecked – can potentially decimate the palm oil industry within just 20 years.

The red palm weevil, or Rhynchophorus ferrugineus, is a species of beetle that excavates holes in the trunk of palm trees, eventually killing the plant. It infests coconut palms, date palms and oil palms.

According to the Department of Agriculture’s (DoA) Plant Biosecurity Division, so far a whopping 465ha of coconut trees are gone, mainly in Terengganu and Kedah.

There are 85,799ha of coconut palms in Malaysia. Additionally, 335 date palms have been eaten. 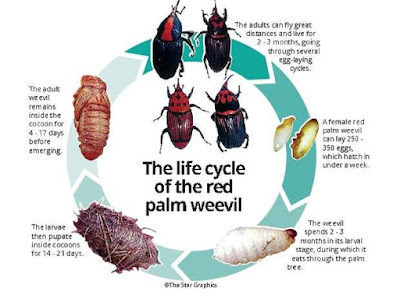 So far, said department head Faridah Aini Muhammad, no commercial plantations had been affected, but the weevil’s spread was a major cause for concern.

“What worries us is that if these beetles do not have access to their main source of food in date palms, they will move to oil palm trees.

“There have been reports which are still unconfirmed as yet, but it is a very real concern,” she said, adding that research was currently ongoing in several universities across the country.

“Research at UKM has shown that even without being forced, the weevil will go to the palm oil fruits and breed inside the tree itself.”

The red palm weevil first entered the country when seedlings and date palms were illegally brought in across the border with the beetle in the trunks.

Under Malaysia’s Plant Quaran­tine Act, the import of any palms except for research purposes is prohibited.

So far, the weevil can be found in five states – Perlis, Kedah, Kelantan, Penang and Terengganu – with the latter being the worst-hit.

“People have been bringing pandan coconut and date palms in for years, but after El Nino recently the weather became more suitable for these palms to flower and fruit, so people wanted to bring it in,” said Faridah.

However, unknown to most people, the bulk of the date palms smuggled in were ornamental plants that would not fruit.

While Malaysia is home to several other species of palm weevil, the one that has recently entered our shores breeds far quicker and so is more dangerous.

“To control its spread, we must spray cypermethrin (an insecticide) every two weeks until the infestation is dead. We have to do preventive spraying as well, including soil drenching (adding diluted chemicals to the base of plants),” said Faridah.

The adults are also killed with the use of pheromone traps, which can be used as an early detection method.

“If we find beetles in the traps, we know there are probably more,” she said.

The DoA has also met with and briefed the Smuggling Prevention Unit (UPP) of the Border Control Agency to look into the matter.

The Biosecurity Division has urged Malaysians to contact the DoA if they notice a possible infestation, or spray insecticide themselves.

“The first sign will be a wilting crown – the leaves fall into a skirt-like formation around the tree. They will then start dropping.

“Eventually, the whole trunk will be hollowed out and potentially fall, which is also a risk to the public, as some areas use palms as avenue trees to line roads and pathways, and even around mosques,” she said.

Faridah said that while the beetle had appeared in Malaysia in 2010, the situation had worsened due to an increase in smuggling.

“We have approached nurseries and told them to stop selling these smuggled date palms, but people must stop buying from unreliable sources, and report any potential smuggling to the authorities,” she said.