Bouea macrophylla, commonly known as buah kundang hijau, asam kundang, or setar in Malay, is a fruit belongs to the Anacadiaceae family.

It is native to the Malesia archipelago, but is not widely grown.

The green mature fruit is eaten fresh, usually with soy source and chili, or used in fruit salad ( rojak ).  It is also pickled in syrup as jeruk.   Ripened fruit is yellowish in colour, also eaten fresh. 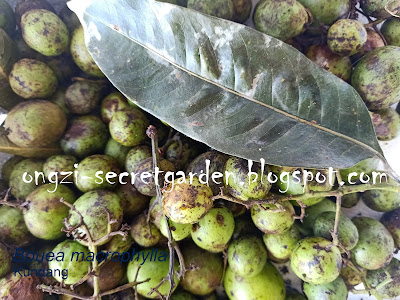 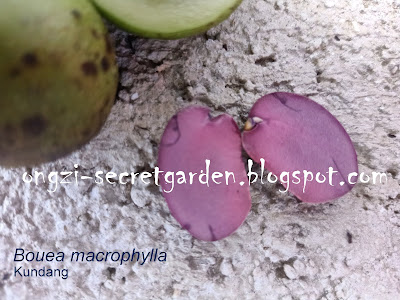 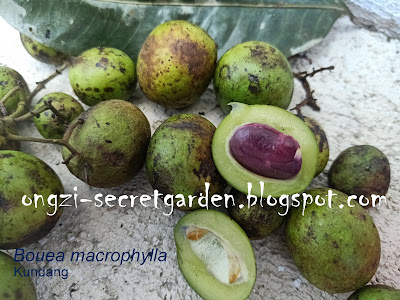 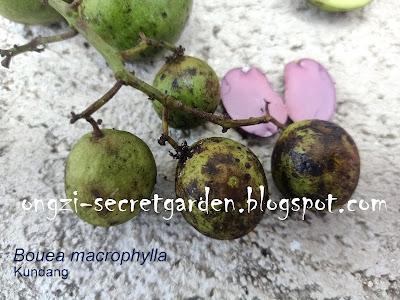 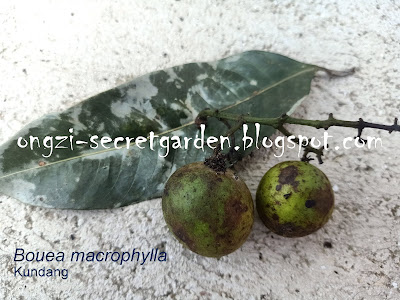 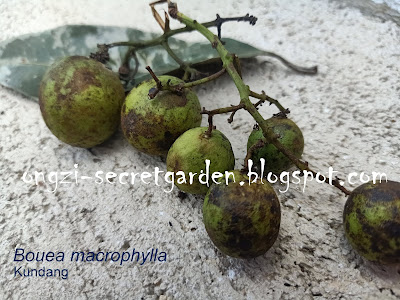 A wide range of variations in leaf shape and coloration has fascinated breeders, landscapers, horticulturists and gardeners, and a huge number of cultivars have been ﬁxed for commercial production. More than 300 cultivars are available in the ornamental horticulture industry.
Diversity in croton’s leaf-shape is quite enormous. The leaf shapes include ovate to linear, entire to deeply lobed, appendiculateat the middle connected by midrib. Coloration and color pattern on the leaves is also a prominent characteristic to distinguish each cultivar.

The phenotypic diversity observed in croton leaves is of a great interest in plant science because virtually all types of leaf morphology can be seen in one species; the plasticity in leaf phenotype is extremely high.

It appears that genetic instability is associated with the leaf phenotypic diversity. Somatic mutations and/or cross pollination by ants may be involved in the mechanism for creating such high diversity.

A high variation in chromosome numbers and karyotypes may attribute to the morphological diversity among the cultivars of this species.

Croton cultivars can be devided into groups based on leaf types:
1.  Slender
2. Oval
3. Curly
4. Lobed
5. Interrupted 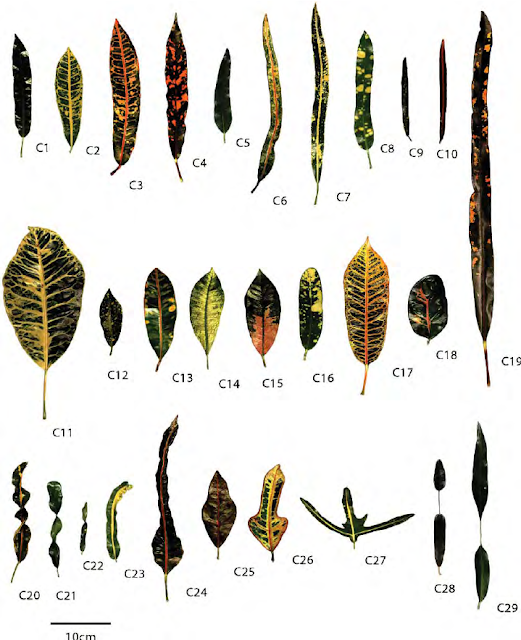 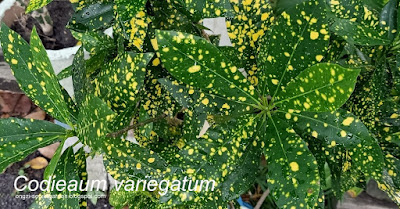 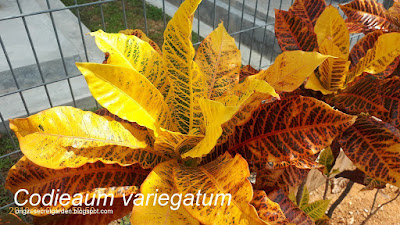 The Four Tribes of Malvoideae

Subfamily Malvoideae now comprises the traditional Malvaceae and has consistently emerged as a very homogeneous, monophyletic group. In a recent treatment of Malvoideae, Bayer and Kutbitzki (2003) divide the subfamily into four tribes: Gossypieae, Hibisceae, Kydieae, and Malveae.

The Malvoideae can be further ranked into the tribes listed below:

Tribe Gossypieae has been redifined to include eight genera: Gossypium, Cephalohibiscus, Cienfuegosia, Hampea, Kokia, Gossypioides, Lebronnecia and Thespesia. It is specifically separated from the Hibisceae tribe based on embryo structure and the presence of pigment glands. These glands are associated with the capacity to synthesize the pigment gossypol. The Gossypieae appear to be unique in possessing these glands and this capacity.

More than 50 species of Gossypium are distributed in arid to semi-arid regions of the tropics and subtropics. Of these, four species were independently domesticated for their fiber (cotton) in Africa, Asia and the Americas. Gossypium species exhibit extraordinary morphological variation, with a diverse array of characteristics, ranging from trailing herbaceous perennials to 15m tall trees.

Tribe Hibisceae
Tribe Hibisceae is best known for its largest genus, Hibiscus — one of the world's most popular horticultural plant genera — which includes more than 300 species worldwide. The tribe Hibisceae includes (but is not limited to) :  Abelmoschus, Hibiscadelphus, Hibiscus, Kosteletzkya, Malvaviscus, Pavonia, Radyera, Talipariti and Wercklea.

Tribe Malveae includes approximately 70 genera (1000 species) that encompass the majority of the morphological and taxonomic diversity in the Malvoideae subfamily. The genera of Malveae exhibit a broad geographic distribution, with representatives in both tropic and temperate areas in a variety of habitats. Around 15 of the 70 Malveae genera have mostly temperate distributions, while some of the largest genera in the tribe (Abutilon, Sida, Nototriche) have primarily tropical distributions.

The Nine Subfamilies of Malvaceae

The Malvaceae family presents many challenges for taxonomists. Opinions often differ as where to draw the lines between species, between genera, between tribes and between the subfamilies. This is not surprising — the Malvaceae family encompasses over 200 genera with close to 2,300 species!

In recent years an expanded circumscription of the Malvaceae family has been created, which is composed of nine subfamilies. The relationships between these subfamilies are still obscure, and the subject of ongoing discussion. The traditional Malvaceae have been moved to Malvoideae, the subfamily that now approximately corresponds to that group.

The Nine Subfamilies of Malavacae 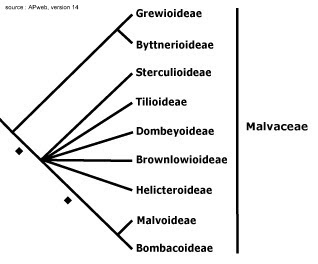 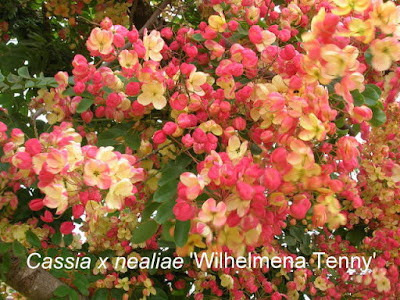 The rainbow shower tree is actually a sterile hybrid of two Cassia species.   In Honolulu, it became so widely cultivated that the multicolored cultivar “Wilhelmina Tenney” was declared the official tree of the City and County of Honolulu in 1965.

The original hybrid cross was done in Hawaii around 1916 by David Haughs.

The tree is scientifically named Cassia x nealiae honoring Marie C. Neal.  She was a well-known Hawaiian botanist and author of botanical reference book, “In Gardens of Hawaii.”  In her 1928 original and her 1965 revision, she refers to the rainbow shower as the cross Cassia javanica x C. fistula.

Four distinct color variants have resulted from the original cross, they include ones that are predominantly yellow, white or gold as well as “Wilhelmena Tenny,” which produces the streaked yellow and cerise flowers. The flowers on the rainbow trees are produced on long pendulant racemes that appear on branches that bear stems of inch-long dark green leaflets. 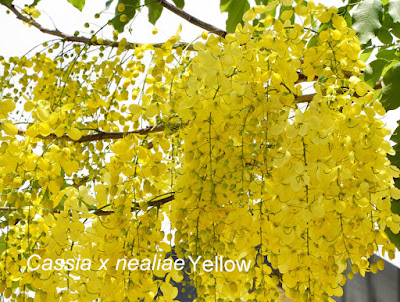 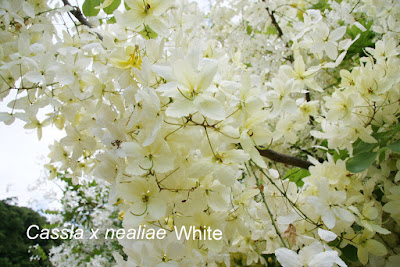 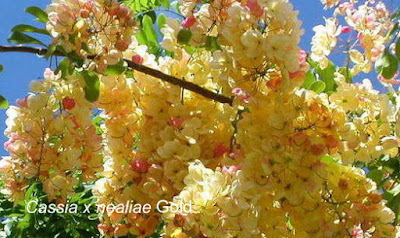 Rainbow shower trees can tolerate many soil types but prefer to grow in soil that drains well. The tree is fairly drought tolerant and can make a nice addition to a xeriscape garden. It is not, however, very salt or wind tolerant, so should be grown away from the ocean and in areas of low wind.

Eleutherine bulbosa is an herbaceous, perennial flowering plant species in the iris family (Iridaceae) , first described as a genus in 1843.  The generic name derived from the Greek word eleuthera, meaning "free".

It is known as Bawang Dayak in Sarawak, Bawang Sabrang ( Indonesia ), Babawangan ( Sunda ) 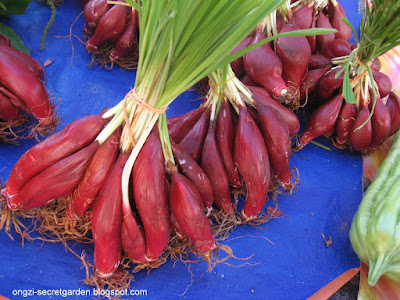 Description
E. bulbosa is a berbaceous plant capable to grow up to 40cm in height.
The stem is erect or drooping, subterranean, elongated ovoid and red in colour.
The leaves ae radial, lanceolate, glabrous, measure 25-60cm x 1.2-5cm.
The flower are white or yellow in colour and open in the evening for 2 hours.

Etnobotany
Eleutherine bulbosa is an important element of the American Indian pharmacopeia.

In SE Asia Eleutherine bulbosa is used as carminative, together with galangal it can treat cold and nasal congestion in children.  In Dayak tribe, it is used the bulb for increasing breast-milk production as well as treatment of diabetes, breast cancer, stroke, hypertension and sexual disorder.  In other areas it is found to treat coronary disorder, and used as diuretic, emetic, purgative, prothrombin decreasing, antifertility, anti-hipertension, wound-healing activity.

Alstonia is a widespread genus of evergreen trees and shrubs, of the dogbane plant family Apocynaceae.  It consists of about 40-60 species, native to tropical and subtropical Africa, Central America, southeast Asia, Polynesia and Australia.

The leathery, sessile, simple leaves are elliptical, ovate, linear or lanceolate and wedge-shaped at the base. The leaf blade is dorsiventral, medium-sized to large and disposed oppositely or in a whorl and with entire margin. The leaf venation is pinnate, with numerous veins ending in a marginal vein.  Phyllotaxy is whorled i.e. two or more leaves arises at a node and form a whorl.

The inflorescence is terminal or axillary, consisting of thyrsiform cymes or compound umbels. The small, more or less fragrant flowers are white, yellow, pink or green and funnel-shaped, growing on a pedicel and subtended by bracts. They consist of 5 petals and 5 sepals, arranged in four whorls. The fertile flowers are hermaphrodite.

Species of the section Memuraspermum have no latex in the trunk bark, in contrast to the species of section Alstonia, where latex may be observed in all parts of the plant. 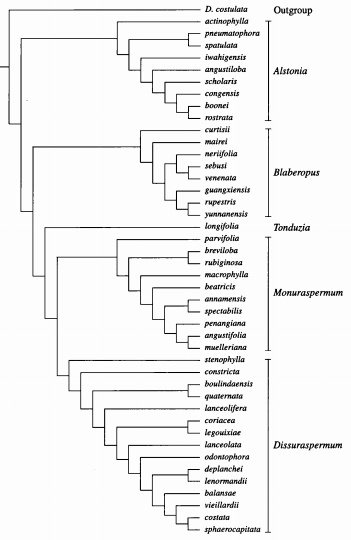 Conservation4
Alstonia trees are widespread and mostly not endangered. 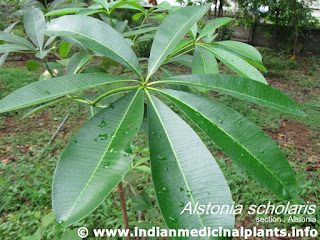 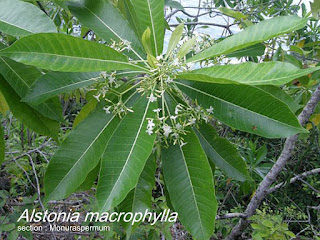 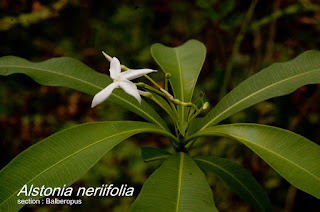 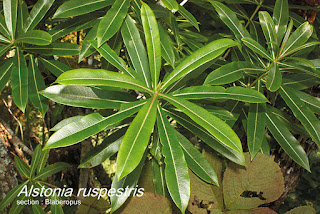 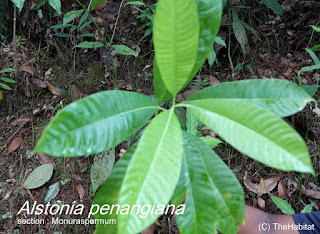 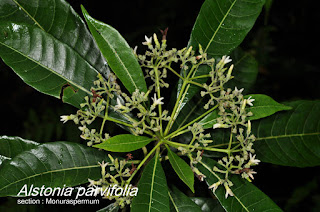 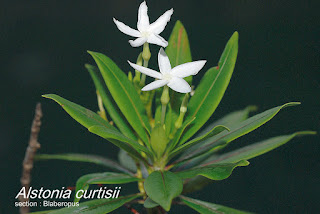 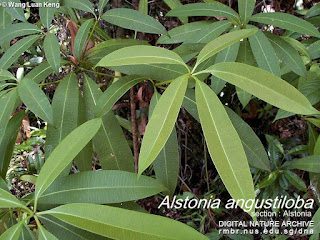 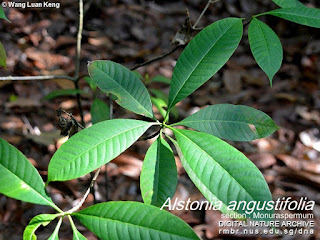 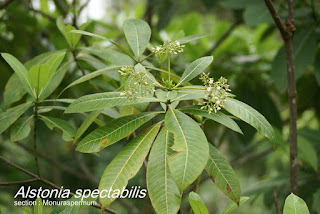 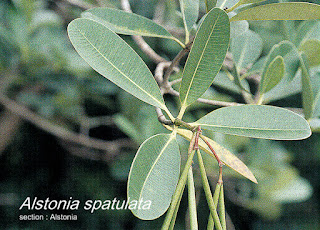