Only a fraction of money used for tree-planting in this soon-to-be launched urban oasis. And it still needs more funds. 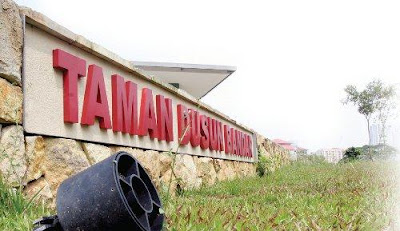 IT was supposed to be an ‘orchard within the city’, a sprawling 7.7ha tropical paradise dotted with rows of fruit trees which would enchant KLites and tourists alike.

Four years later and despite millions spent on development, the Taman Dusun Bandar ‘orchard park’ project in Jalan Bellamy hardly resembles the urban oasis it set out to be.

More shockingly, only RM600,000 from the RM17.2 million allocation was spent on fruit trees!

These were among the discoveries made by The Malay Mail following a chance visit to the park recently.

The park, reportedly due to open in two months time, is nowhere near reaching its target of being an orchard.

In 2005, the then KL Mayor Datuk Ruslin Hassan, in announcing the project, had said upon completion, the orchard park would have 100 species of local fruits like durian, mangosteen, langsat, duku, rambai, ciku, cempedak, jackfruit, guava and banana trees, among others.

An area was also supposed to cater for herbs, coconut palms and spices.

The park, Ruslin was quoted as saying, would be one of the city’s major tourist attractions. It would serve as a haven for tourists and locals to learn about local fauna and sample all kinds of local fruits, as well as camp in the area.

It was supposed to be launched last December.

Our checks at the site, however, showed apart from a handful of mango and ciku trees, the park only had young trees and saplings, some of which were shriveled. There was also an absence of shady trees, forcing visitors to withstand the scorching heat.

It is learnt the project was helmed by former Federal Territories and Urban Wellbeing Ministry deputy secretary-general (Planning and Development) Datuk Bakaruddin Othman.

The contract was awarded to a company to develop the site, formerly the Kampung Delima squatter area, into an orchard park.

However, it is learnt the project has now been handed over to City Hall and there is a possibility more funds will be needed to complete it.

A source from City Hall said many trees had died in the area as a result of improper planning.

"If you want to transform the area into an orchard park, you cannot plant mango or durian trees from scratch, you have to transplant existing fruit trees to the area."

The RM17.2 million allocation for the park was made under the Ninth Malaysia Plan. 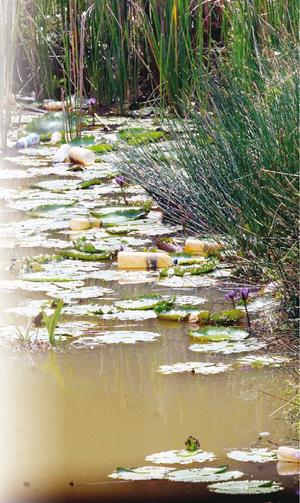 THE Taman Dusun Bandar, despite its pledge of being an 'orchard within the city', has yet to live up to its promise.

A quick chat with a City Hall Landscaping Department sta¬ff stationed at the park revealed that the park was expected to be officially launched within the next two months.

When pointed out that the fruit trees were scarce, the staff said: "Baru tanam, masih kecil lagi" (they've just been planted, they're still small).

The staff also said City Hall personnel had only moved into an administrative building in the area about two months ago.

"For now, you only get people coming here in the morning to jog. It's open to the public but not many know it exists."

A civil servant, Bahari Ayub, 49, told The Paper That Cares the area used to have big shady trees including rain trees.

"But you can't see them anymore as they are all gone. The area is very hot now, there's not enough big shady trees around and you can see that even new plants that are being planted are slowly dying," he said.

The Malay Mail had chanced upon the park a fter visiting the famous Seri Menanti Ikan Bakar in Jalan Bellamy and were surprised to see a park next to the stall. We took a stroll in the park to find out more about the fruit trees planted in the area, but we could not find much except for small trees and some which resembled mango trees.

We also saw some ciku fruits, but they did not look tantalising.

There were hardly any shady trees in the park and walking under the scorching sun at 11am was an unpleasant experience.

We saw plants which had shriveled up and died or their leaves turned completely brown.

Hardly any trees were labelled and we were not able to identify most of them save for a few.

We finally managed to find a shady area which was near a pond situated behind the Kuan Cheng Girls School, where there were a couple of big shady trees including a bamboo tree.

An impressive list of facilities, yet the fruit trees appear to be missing.

HOT AND SUNNY: No shade in sight

"If people were to go there now, there would be nothing to see. People want to know what a durian, ciku, jackfruit or mangosteen tree looks like. If you don't have this, then there is no impact and people will question the relevance of having such a park."

He said the contractor handed the park to them two months ago. It is now under the purview of the council's Landscaping and Urban Cleaning Control Department.

"Yes, the contractor (Zikhtar Associates Sdn Bhd) was awarded the contract to carry out not only landscaping works but also to plant trees. This was a decision made in 2005 and when I stepped into office in 2008, nearly three quarters of the works were completed."

Ahmad Fuad confirmed that RM17 million went towards the project and the money came from the Federal government. However, he said the contractors had later asked for additional funds to "complete" the park, including planting more trees. Their request for an additional RM7 to RM8 million was rejected by City Hall.

"I did not want to give the money because I believe the RM17 million was more than enough for them to carry out the job. I don't want to be accused of wasting public funds."

He said it was unfortunate to learn that the bulk of the money was used for landscaping and other earth works, and less emphasis on planting big trees.

"If you want to have an orchard, you must create an orchard-like environment. You must have trees with lots of fruits, and these must be big shady trees.

"When a tree is big, it would probably only take between one to two years before it starts bearing fruit. We can't be waiting for decades."

Ahmad Fuad said City Hall will have to think of how to 'undo the wrong' and ensure that the park meets its objective.

On how they plan to do this, Ahmad Fuad said they would scout for fruit trees and perhaps, transplant them at the park.

"We may go to rural areas and look for people who want to sell their fruit trees to us. If the price is reasonable then we may consider buying it from them.

"But it's going to be tough for us to find trees."

Ahmad Fuad also said there were some big fruit trees like rambutan in Jalan Cochrane which used to house government quarters.

"We may need to speak to the developers of the area and see if we can take some trees from there."

BARELY a fraction of the RM17 million orchard park project was used for tree-planting, but the contractor maintains that the park has met its objective.

He said the total budget for trees was only RM595,000 from the entire allocation.

He maintained that tree-planting was not the priority.

"You must understand that this was formerly a squatter area and the terrain of this area was uneven and hilly."

He said earthworks in the area began in 2007 and the initial target was for big trees to be planted. However, these trees, he said, would take around six years to bear fruits.

"City Hall were the ones who set the conditions. They leased the contract to us."

Asked if the works carried out were sub-contracted to other parties, he said it was 100 per cent done by his company.

"We want to do the best and we delivered what we proposed. We want to make it a place where people can rest and learn about trees."

Zulbainoor said they had asked for more money for the trees but their request was denied by City Hall.

Asked how was the park was deemed to had met its objective, Zulbainoor said: "City Hall said they will take over (the tree-planting) works."

He said the majority of fruit trees in the orchard comprised wild fruit trees, and only 40 per cent were local fruits like mangoes, durian, ciku, lychee, nangka and cempedak. The trees, he said, were planted two years ago and it would take some time before they bear fruits.

Asked why the bulk of trees were wild fruit trees, he said: "This is not an ecoresort."

He also said it was impossible for existing big trees, which would take a shorter period to bear fruits, to be planted in the area as they were difficult to find.

"City Hall had asked for 200 big trees to be planted here. But this does not make sense as you cannot get big trees."

"You can scour the entire country but you won't be able to find them," Zulbainoor said.

"We carried out a lot of research on the soil condition and even though it is mostly clay, it is possible to plant but it will take time."

When asked how visitors were supposed to learn about trees when they were all small, he said City Hall was supposed to take pictures of the trees and label them for reference in an education centre within the park.

He said some trees were dead or dying because they were struck by lightning and all trees had tags but were missing since two years ago.

Zulbainoor also refuted claims the park was handed over to City Hall two months ago as they were in the midst of getting a certificate of completion and compliance.

He also said the company has yet to receive full payment for the works carried out.

Indian drumstick is Moringa oleifera, a flowering tree from the family Moringaceae native to southern foothills of the Himalayas.
The genus name ‘Moringa’  derived from Tamil word ‘murunggai’ or Malayalam word ‘muringa’, both of which refer to M. oleifera.
M. oleifera is considered one of the world’s most useful trees.  Almost every part of Moringa tree can be used for food, or has some other beneficial property.
The greed pods and seeds are consumed as greens.   The flowers are edible, said to taste like mushrooms.
The roots are shredded and used as a condiment.  The root contains of spirochin, a fatal nerve-paralyzing agent.  However the spirochin content is very less to have elicit deleterious effects.  In fact, small amount of spirochin demonstrates antibacterial properties.
The leaves are rich in β-carotene, vitamin C, iron, potassium and protein.  The leaves are dried and crushed into powder, and used in soups, sauces, and supplement for children.
Almost all part of the plant can be used in traditional medicine.   The seeds is used for treating erectile dysfunction in man and prolong sexual activity for woman.
In Jamaica, the sap is used for a blue dye.
It is also used as forage for livestock.
M. oleifera is propagated via limb cuttings of 1 – 2 m long.  It can also be propagated by seeds.
Fruiting starts after 6 – 8 months.
It is often cut back annually to about 1 meter and allowed to re-grow so that the pods and leaves remain within arm’s reach.
Posted by Ongzi at 14:10 4 comments: