In some classification systems, eg. Cronquist System, treat Fabaceae in a narrow sense, raising Mimosoideae to the rank of famiy as Mimosaceae. The Angiosperm Phylogeny Group treats Fabaceae in the broad sense, thus making Mimosoideae a subfamily.
. 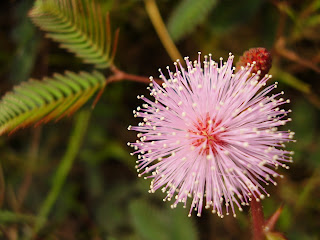 Mimosa pudica is a creeping perennial herb from the Fabaceae family. It is native to South America and , but is now a pan-tropical weed.
..


Mimosa pudica was first formally described by Carl Linnaeus in Species Plantarum in 1783. The species epithet, pudica, is Latin for ‘bashful; or ‘shrinking’, alluding to its shrinking reaction to contact.
.


The leaves undergo nyctinastic movement, which close during darkness and reopen in light. But M. pudica is more recognized for its sensitive leaves, thus named Touch-Me-Not , or Sensitive Plant. The bipinnately compound leaves fold inward and droop when touched or disturbed ( seismonastic movement ), re-opening minutes later. It is not known exactly why M. pudica evolved this trait, but many scientists think that the plant uses its ability to shrink as a defense from predators. Animals may be afraid of such fast moving plant and would rather go and eat a less active one. Another possible explanation is that the sudden movement dislodges harmful insects.
.


Its flowers are pink in colour, glabrous, 8-10mm in diameter. The flowers are pollinated by the wind and insects. Propagation is by seeds.
.


M. pudica can form root nodules that are inhabitable by nitrogen fixing bacteria.
.
.
. 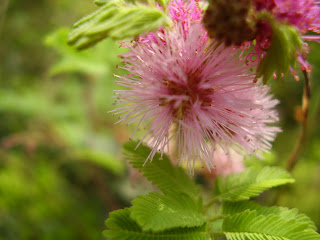 Mimosa diplotricha is a perennial shrub originated from . It can grow up to 2 m in height.
.


The leaves are bipinnately compound, but less sensitive compare to M. pudica. Flowers are pink in colour. Seeds can remain in soil for years before geminating, but if condition is favorable, it will germinate immediately. It grows vigorously and form dense ground cover and thickets, often regarded as noxious weed.
. 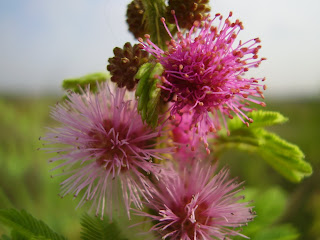 Mimosa pigra is a perennial shrub capable of reaching up to 6 m in height. The stem is greenish in young plants but become woody as the plant matures. The leaves are bright green and bipinnately compound. Leaves are sensitive and fold up when disturbed and at nightfall, but not as sensitive compare to M. pudica and M. diplotricha.
.


M. pigra is native to South America and , also has been listed as one of the world’s 100 worst invasive species.
.


The flowers are pink in colour, glabrous, 8-10mm in diameter. Seeds can survive at least 23 years on sandy soils. Germination takes place all year round, especially after wet season.
.


M. pigra also have root nodules that help fix nitrogen into the soil. 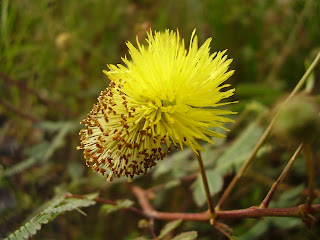 Neptunia plena is an aquatic perennial shrub from the tropical .
.


The flower is yellow in colour, glabrous. The leaves are mildly sensitive.
.


N. plena is plant for ornamental purpose, but in most place it become a noxious weed.
..
. 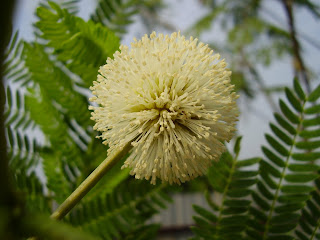 
The specific name is derived from the Greek words leuco, meaning ‘white’, and cephala, meaning ‘head’, referring to its flowers.
.


L. leucocephala is used for firewood, fiber and livestock fodder. In 1970s and 1980s, it was promoted as a ‘miracle tree’ for its multiple uses, but soon it becomes a ‘conflict tree’ as is spreads as a weed in some places.
.


The young seeds are edible, but need to be pre-cooked to denaturalized the mimosine, which can be toxic to non-ruminants vertebrates.
Posted by Ongzi at 15:31 No comments:


Pontederiaceae is a family of an aquatic flower plants, distributed in tropical and subtropical waters..


Members of the Pontederiaceae family are normally annuals or perennial aquatic herbs. They are either free floating or rooted. Some leaves with inflated petiole for floating..


Due to its showy inflorescences, some species including Eichhornia are use as ornamental plants in water gardens & aquariums. However, as most Ponderiaceae grow gregariously in pool, ditches, and rice fields, they had become noxious weeds, blocking waterways, and competing nutrition with crops and crowd out native species. Some species are use as livestock feed, and as green manure. The young leaves and petioles of Eichhornia crassipes are sometimes used as a vegetable. . 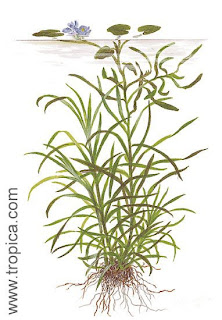 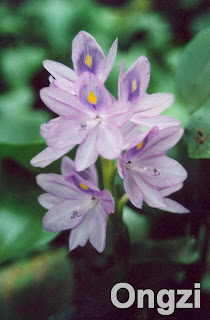 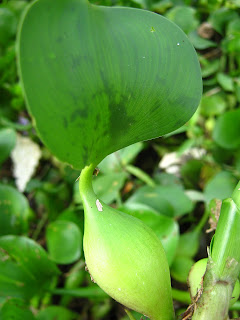 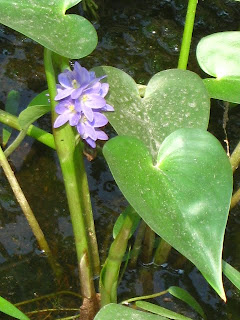