An Apple Red as a Rose 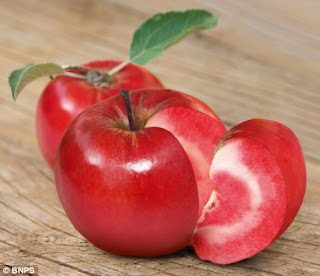 The Daily Mail reports that the Redlove® Era® apple has arrived in . The fruit trees are available for purchase in , but it will be a year before the fruit hits supermarket shelves in the United States.
The apple is red on both the outside and the inside. The apple's red flesh also will not turn brown like that of other apples.
The Daily Mail says Mark Kobert, a Swiss fruit grower, spent 20 years cross-pollinating apples to come up with the Redlove. The BBC reports that the Redlove® was "created through the cross-pollination of Royal Gala ® and Braeburn® apples as well as a secret variety that has pink flesh."
.
.
Posted by Ongzi at 11:02 No comments:

An insecticide is a pesticide used against insects. They include ovicides and larvicides used against the eggs and larvae of insects respectively. 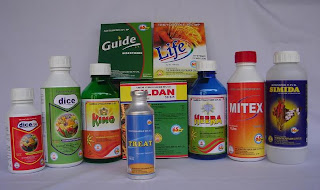 Insecticides are used in agriculture, medicine, industry and the household. .
.

The use of insecticides is believes to be on of the major factors behind the increase in agricultural productivity in the 20th century. Nearly all insecticide have the potential to significantly alter ecosystems ; many are toxic to humans; and others are concentrated in the food chain..
.

Insecticide can be classified by activity, use, chemical family, or mode of action.
. .


1.Systemic insecticides are incorporated by treated plants. Insects ingest the insecticide while feeding on the plants.
2.Contact insecticides are toxic to insects brought into direct contact. Efficacy is often related to the quality of pesticide application, with small droplets often improving performance.


Classification by Type of Chemical


1.Natural insecticides, such as nicotine, pyrethrum and neem extracts, are made by plants as defences against insects.
2.Organic insecticide are synthetic chemical derived from various carbon based chemical.
3.Inorganic insecticides are manufactured with metals, eg. Arsenates, copper compounds, fluorine compound, and sulfur.

Classification by Mode of Action. 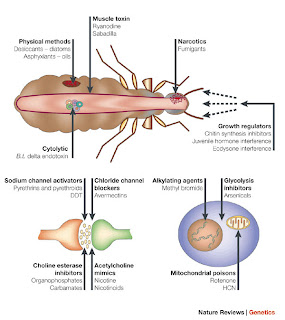 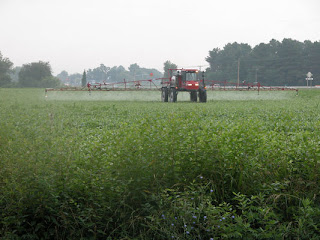 Herbicide, commonly known as a weed killer, is a substance used to kill weed.
.
A weed in a general sense is a plant that is considered as a plant in an undesired place, at an unwanted time. Weeds may be unwanted for a number of reasons : they might be unsightly, or crowd out or restrict light to more desirable plants or use limited nutrients from the soil. They can harbor and spread plant pathogens that infect and degrade the quality of crop or horticultural plants. Some weeds are nuisance because they have thorns or prickles, some have chemicals that cause skin irritation or tare hazardous if eaten, or have parts that come off and attach to fur or cloths
.
Herbicides can be grouped by activity, use, chemical family, mode of action, or type of vegetation controlled.
.
. .
Classification by Activity :.
1.Contact
Destroy only the plant tissue in contact with the chemical. Generally, these are the fastest acting herbicides. They are less effective on perennial plants, which are able to regrow from rhizomes, roots or tubers.
2.Systemic
Translocated through the plant, either from foliar application down to the roots, or from soil application up to the leaves. They are capable of controlling perennial plants and may be slower acting but ultimately more effective than contact herbicides.

. . .
Classification by Use :.
Soil-applied herbicides are applied to the soil and are taken up the roots of the target plant..
1.Pre-plant incorporated herbicides are applied prior to planting and mechanically incorporated into the soil. The objective for incorporation is to prevent dissipation through photodecomposition and/or volatility..
2.Pre-emergence herbicides are applied to the soil before crop emergence to prevent germination or early growth of weed seeds..
3.Post-emergence herbicides are applied after crop has emerged.
. .
.
Classification by Mechanism of Action.
The classification by mechanism of action ( MOA ) indicates the first enzyme, protein or biochemical step affected in the plant following application..
1.ACCase inhibitors
Acetyl coenzyme A carboxylase ( ACCase ) is part of the first step of lipid synthesis. Thus ACCase inhibitors affect cell membrane production in the meristems of grass plant. ACCase of dicot plants are not sensitive to these herbicides..
2.ALS inhibitors
Acetolactate synthase ( ALS ) enzyme, ( acetohydroxyacid synthase, AHAS ) is the first step in the synthesis of the branched-chain amino acid ( valine, leucine & isoleucine ). These herbicides slowly starve affected plants of these amino acids which eventually lead to inhibition of DNA synthesis.
ALS inhibitors affect both grasses and dicots.
ALS inhibitors includes : sulfonylureas ( SUs ), imidazolinones ( IMIs ), triazolopyrimidines ( TPs ), pyrimidinyl oxybnzoates ( POBs ), and sulfonyamino carbonyl triazolopyrimidines ( SCTs ).
ALS is a biological pathway that exists only in plants and not in animals, thus making the ALS inhibitors among the safest herbicides..
3.EPSPS inhibitors
The enolpyrubylshikimate 3-phosphate synthase enzyme ( EPSPS ) is used in the synthesis of the amino acids tryptophan, phenylalanine and tyrosine.
EPSPS inhibitors affect both grasses and dicots.
Glyphosate is a systemic EPSPS inhibitors, but inactivated by soil contact..
4.Photosystem II inhibitors
Photosystem II inhibitors reduce electron for from water to NADPH+ at the photochemical step in photosynthesis. They bind to the Qb site on the D1 protein, and prevent quinine from binding to this site. Therefore this group of compounds cause electrons to accumulate on chlorophyll molecules. As a consequence, oxidation reaction in excess of those normally tolerated by the cell occure, and the plant dies.
Triazine and diuron are photosystem II inhibitors..
5.Photosystem I inhibitors
Photosystem I inhibitors steal electron from the normal pathway through – Fdx – NADP leading to direct discharge of electron on oxygen. As result, reactive oxygen species ( ROS ) are produced and oxidation reaction in excess of those normally tolerated by the cell occure leading to plant death.
Diquat, paraquat hit Fe – S – Fdx step.
Nitrofen, nitrofluorfen, acifluoren hit Fdx – NADP step..
6.Synthetic auxin
Synthetic auxin is effective in the control of dicot plants.
2,4-D is a synthetic auxin herbicide.
. .
.
Classification by Type of Chemical
. .
.
Major Herbicides in Use
.
2,4,-D
- broadleaf selective, systemic herbicide
- group : phenoxy, synthetic auxin
- MoA : absorbed through leaves, translocate to meristem, increase growth rate
- developed during WW2 by researchers from Rothamsted Experimental Station, lead by Judah Hirsch Quastel
- trade name : Amine®, Rumputox®, Weedtox®
.
DCMU
- broad-spectrum herbicide
- group : Urea
- MoA : photosystem II inhibitor
- released in 1954 by Bayer
- trade name : Diuron®
.
Dicamba
- broad-sprectrum herbicide
- group : benzoic
- MoA : increase growth rate
- toxic to human being by ingestion and inhalation
.
Glyphosate isopropylamine 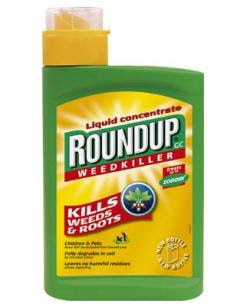 Pesticide is any substance or mixture of substances intended for preventing, destroying, repelling or mitigating any pest. A pesticide may be a poisonous chemical, chemo sterilants, attractants, repellent, defoliants, desiccants, growth regulators, biological agent, antimicrobial, disinfectant or device used against any pest.

Pest include insect, plant pathogens, weeds, mollusks, birds, mammals, fish, nematodes, and microbes that destroy property , spread disease or are a vector for disease or cause a nuisance. 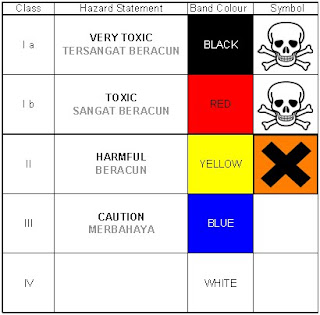 The following information can be found on a pesticides’ label: 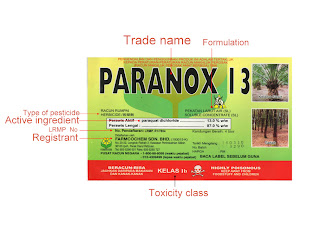 Firefly is a type of insect of the family Lampyridae. Usually found in tropical regions, fireflies can be found all over the world. In , the highest concentration of fireflies at any one location is found on the banks of the Sg Selangor at Kampung Kuantan. The species that thrived here is of the Peteroptyx tenor. 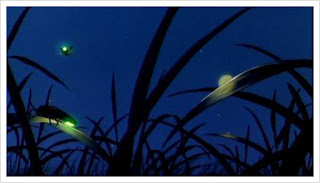 The main attraction of fireflies is the mesmerizing flashes of lights that fireflies produce. The light is actually produced through a chemical reaction, bioluminescence, inside a special organ known as the photic organ, located on the underside of the abdomen.
Luciferin + ATP + Oxygen ® Oxyluciferin + AMP + Light
Unlike the light that one normally sees, the light produced by the fireflies does not contain infrared or ultraviolet light.. 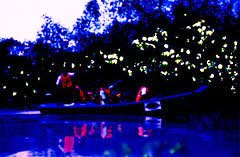 The male fireflies emit light to attract the female in a protracted courtship ritual. Fireflies usually emulate each other’s pattern of flashing. This imitation ritual contagiously affects the whole colony, making the timing of the flashes synchronized.. 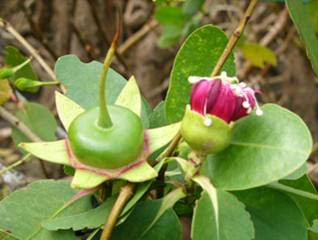 A species of mangrove tree, the berembang, Sonneratia caseolaris, grows in profusion along most parts of Sg Selangor at Kampung Kuantan. The lower over-hanging branches of the berembang trees have always been a favourite of the fireflies. However, the fireflies don’t always congregate on berembang tress, they also seen resting on other trees.

Life Circle of Firefly
A female firefly only lays about 15 -30 eggs in the laboratory. The eggs are small, pearl-like, round, and translucent. The eggs hatch after 15 – 30 days..
Newly-hatched larva measures a mere 2mm in length, translucent or whitish , turn to darker shade after it starts to feed. The larva is not able to twinkle, but it lets out a subdue glow..

The larva feeds mainly on the snail species Cyclotropis carinata. C. carinata is a small shell, approximately 7mm long. During the day, these snails can be found resting under rotting palm leaves and in between the grass around the swampy area along the riverbank. The snails are active at night, feeding on algae and rotting plants. .
When a firefly larvae comes across a snail, it will pierce the soft flesh with its jaws, injecting a toxic fluid to immobilize it. 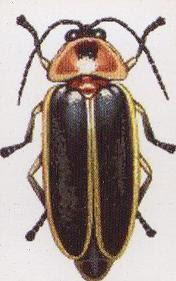 .The larvae will go through a few instars until it grow up to 1cm long. The entire larvae stage takes a few to several months.
.The firefly’s pupa is a stage that is inactive. During this time the firefly undergo a complete transformation, of which it will finally emerge as an adult firefly. The pupal stage last only 9 – 12 days.
The adult firefly lives for only 4 – 5 weeks..
The overall life span for the whole life cycle of the firefly is between 6 – 7 months.
Posted by Ongzi at 23:33 No comments: 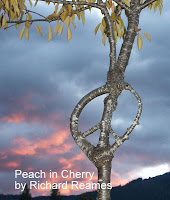 Arborsculpture, is a tree shaping craft of training the living, growing wood of cultivated woody plants into ornamental shapes, useful implements, and structures.

Designers choose from among various compliant wood-forming plant species and an evolving array of design options, techniques, and tools to guide and shape living wood tissue as it grows, both above and below ground perhaps bending, pleaching, weaving, twisting, braiding, grafting, framing, molding, controlling light, or pruning to achieve an intended design.

The craft has been practiced for at least several hundred years, as demonstrated by ling root bridges built by the War-Khasi people of India. 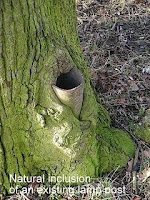 Designs may include abstract, symbolic, or functional elements. Some shape crafted and grown are purely artistic, while other designs might yield may of a wide variety of useful implements, such as clothe hanger, laundry bin, ladders, furniture, tools and tool handles.. Large architectural designs such as live archways, domes, gazebos, tunnels, rooms, and entire homes are possible with careful planning, planting, and culturing over time.

The time needed to grow and construct a project depends on many variables, including the size of targeted trees, the growth rate of species, the intended design height, the local climate conditions, and the specific techniques used. A chair design may take 8 – 10 years to reach maturity. 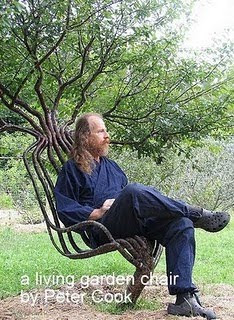