Darwin was fascinated by the effects of light on plant growth, as was his son Francis. In his final book, The Power of Movement in Plants, Darwin wrote: ‘There are extremely few [plants], of which some part … does not bend towards lateral light.’ Or in less verbose modern English: almost all plants bend towards the light.

In a very simple experiment, published in 1880, Darwin and his son showed that this bending was due to some inherent sensitivity to move towards the light.

For their experiment, Darwin and his son, Francis, grew a pot of canary grass (Phalaris canariensis) in a totally dark room for several days. Then they lit a very small gas lamp twelve feet (3.5 metres) from the pot and kept it so dim that they ‘could not see the seedlings themselves, nor see a pencil line on paper.’ But after only three hours, the plants had obviously curved towards the dim light. The curving always occurred at the same part of the young plant, an inch or so below the tip.

They checked phototropism in five different seedlings, illustrated by the following diagram:

In this experiment, the Darwins proved that phototropism is the result of light hitting the tip of a plant’s shoot, which sees the light and transfers this information to the plant’s midsection to tell it to bend in that direction.

Extracted from What a Plant Knows – A Field Guide To The Senses Of Your Garden And Beyond, 2012, Daniel Chamovitz

Lemang is a traditional Malay food made of glutinous rice, coconut milk and salt, cooked in a hollowed lemang bamboo, lined with banana leaves.

The lemang bamboo ( buluh lemang ) ( Schizotachyum brachycladum ) is used for cooking lemang because of its unique properties : 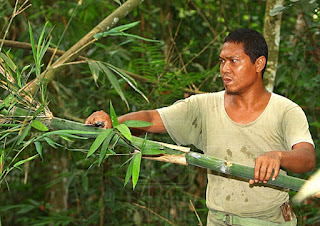 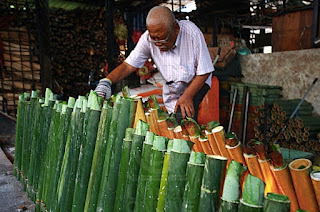 1. Availabililty – Not Too Difficult To Find
The bamboo is evergreen plant native to tropical Asia, abundance all over lowland secondary forest.  It produces several new stems annually, each stems grow to their maximum heights in their first year of growth.  Propagation is common, usually by rhizome and clum cuttings.

It has been used in Borneo, Java, Bali, Malesia, Cochinchina, etc for construction, handicraft, container for water and cooking, etc. 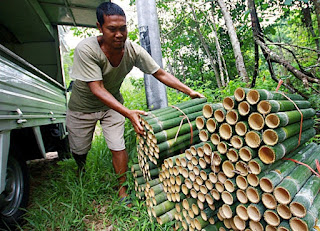 2. Length – Not Too Long, Not Too Short
Buluh lemang’s clum are erect and straight, about 10-15m in length, 6-8cm in diameter. With approximately 7-10 hollow internodes, each 20-50cm in length, buluh lemang is suitable as a vessel for cooking. 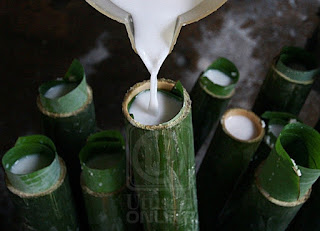 3. Thickness – Not Too Thick
The bamboo’s internode wall is thin, about 3-5mm think, comparable to other species of bamboo.  The thin wall is easy to cut through, shortened the cooking time and uses less firewood.