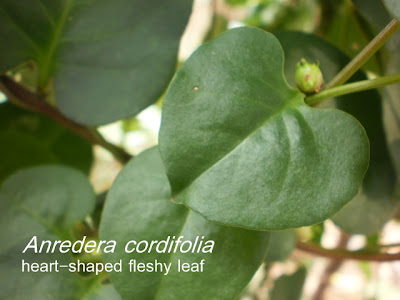 Anredera cordifolia, commonly known as the Madeira vine, or 田七菜, 藤三七 (落葵薯) , is a South American vine species of the family Basellaceae.   Basellaceae is parked under order Carophyllales according to the APG System.  There are some 2 dozens species in Basellaceae family, divided by 4 genera : Anredera, Basella, Boussingaultia, and Ullucus.
A. cordifolia is an evergreen climber that grow easily from its fleshy rhizomes.  It has bright green, heart-shaped, fleshy shiny leaves, about 5cm long.  It produces aerial tubers on their stems.  Flowers are small and white in colour, produced in spikes.
It has been introduced to Africa, Australasia-Pacific, Europe, North America, Asia as ornamental plant and leafy vegetable.  However, due to the plant spread easily via the tubers, and its vigorous growth, the plant is considered an invasive species in many countries.  It is listed on the New Zealand National Pest Plant Accord which limits its cultivation and sale.  The fleshy leaves and thick aerial tubers makes it a very heavy vine, easily break branches and bring down entire trees.
The fleshy leaves and tubers are edible.  The leaves, after cooked, are somehow slimy and smooth.  Tubers are often used in cooking soups. 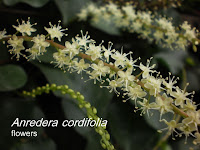 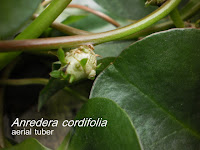 Mangroves are various kinds of plants that grows in saline costal sediment habitat in the tropics and subtropics.  A narrower definition refers only for the mangrove family of the plants, the Rhizophoraceae.  More specifically, mangroves are just for mangrove trees of the genus Rhizophora.
Mangroves form a distinct characteristic saline woodland or shrubland habitat, called mangrove swamp, mangrove forest, mangrove or mangal.  It dominates 3 quarters of tropical costlines.
A total of about 110 species are considered mangroves, of different opinions.  Tomlinson ( 1986 ) identified 54 species ; Duke ( 1992 ) identified 69 species.  Categorization is usually based on the plants’ adaptation to low oxygen, high salinity, poor nutrient and offspring survival mechanism.
Tomlinson, in his book The Botany of Mangoves, published by the Press Syndicate of University of Cambridge in 1986, categorized mangal species into 3 groups : major elements, minor elements, and mangal associates.
Major elements are recognized by Tomlison, as ‘strict or true mangroves’, because they posses all or most of the following features :
1. complete fidelity to the mangrove environment : that is, they occur only in mangal and do not extend into terrestrial communities
2. a major role in the structure of the community and the ability to form pure stands
3. morphological specialization that adapts them to their environment; the most abvious are aerial roots, associated with gas exchange, and vivipary of the embryo, whose functional significance is not clear
4. some physiological mechanism for salt exclusion so that they can grow in sea water; they frequently visibly excrete salt
5. taxonomic isolation from terrestrial relatives.  Strict mangroves are separated from their relatives at least at the generic level and often at the subfamily or family level.  For minor mangrove, the isolation is mostly at the generic level.

The minor species are distinguished by their inability to form a conspicuous element of the vegetation.  They may occupy peripheral habitats and only rarely form pure communities.

Mangoves associates are less distinctive.  They may be herbaceous or subwoody,  dispersed by sea currents, grass or rushes or sedges, ferns, etc.   Gymnosperms and conifers are likely to be excluded in the group.
Posted by Ongzi at 15:49 No comments: 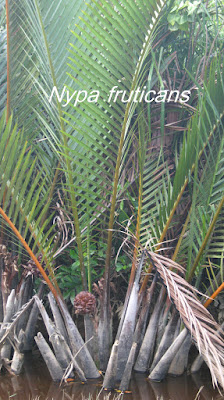 Nypa fruticans, known ask the nipah palm, or attap palm.  It is the only palm species considered a mangrove in the Mangrove Biome.  N. fruticans is a monotypic taxon, meaning that it’s a lone biological type within the genus.

N. fruticans grows in soft mud of southern Asian and northern Australia costal tropical.  It is an endangered species in Singapore.

It has a horizontal trunk that grows beneath the ground, only the leaves and flower stalk grow upwards above the surface.   The leave frond can reach up to 10 meter in height.  The flowers are a globular inflorescence of female flowers at the tip, with yellow-to-red male flowers on the lower branches.    The fruit is a drupe, fibrous, airy, in a cluster.  Ripe fruitlets separated from the bunches, and floated away on the tide.

The piths ( umbut ) are harvested, consumed as vegetables.  The long, feathery frond are used as roofing material ( daun attap ), and wall panel.

Seeds of older fruit are made into powder.