A trip to the northern island of Penang, Malaysia usually ends up in heritage sightseeing or food hunting.  There are actually other Penang’s best that not many are aware of.

Penang Botanic Gardens, established in 1884, the first botanic gardens in Malaysia, is a place not to be missed.  So are the Penang Hill, Penang National Park, Spice Garden, Tropical Fruit Farm, Butterfly Farm etc.

It was very unfortunate for me as I didn’t had the chance to visit Penang Hill.  The funicular train was not yet operational.   However I managed to ride the road tram at Penang Botanic Gardens, briefly though, no thanks to the unpredictable tropical rain.   I visited the Butterfly Farm at Teluk Bahang too, but in a hasten manner.

Yet, I did encountered some plants at places least expected. 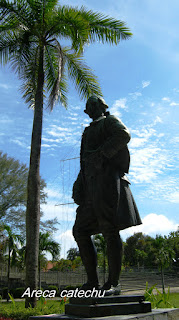 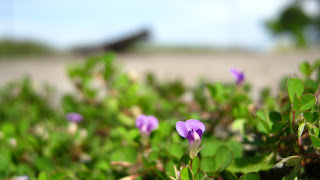 At Fort Cornwallis, Captain Sir Francis Light’s statue stood high by a Areca catechu, locally known as pokok pinang, the betel nut palm, of which the island gets its name.

Also at Fort Cornwallis, a tiny purple peanut-like legume shyly grows at a corner.  I had yet learn its real name.
( Ongzi 2014 :  oh ! it''s Desmondium triflorum ) 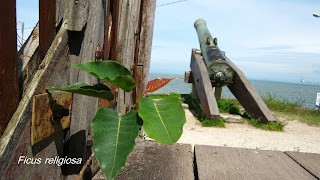 On a wooden crossing, a Ficus religosa quietly encroaching its roots. 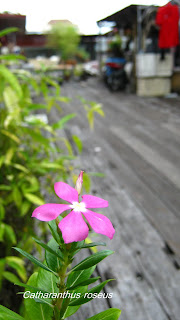 Then, at the Clan Jetties, I spotted a pot of malnutrition Catharanthus roseus.   Yet, the greens still capable of portraying a great contrast to the grayish wooden plank. 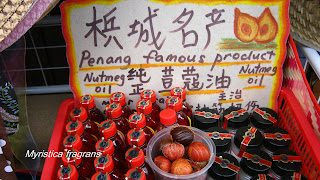 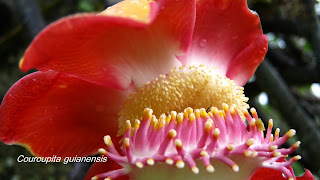 Finally, at Penang Botanic Gardens, before it rains, I snapped a few photos of the infamous cannonball trees, Couroupita guianensis.  They were still in flowering stage, no cannonball-fruit sighted.
Posted by Ongzi at 15:32 No comments: